Breakfasting poolside under a clear blue sky on the vine covered patio of the Hotel the following morning, all seemed a little brighter, until Ahmet dropped the bombshell that the hotel was full that night so we would have to vacate our room.  So with the car loaded with all my worldly goods (that is all that I hadn’t sold on EBay, of course), we made our way to Ahmed’s shop, which he ran with his five brothers.

Back at the shop I was warmly welcomed by his family, whilst Ahmed set to work on his daily chores and in the meantime, I was able to catch up with my family at the adjoining internet café.  The day passed quite slowly, with Ahmed and brothers plying me with refreshments throughout the day.  Any queries I had regarding our accommodation for that night were casually brushed aside with “s’okay”.   I, however, was not reassured.  Later and I do mean much later, Ahmed and one of his brothers took off in the car without so much as a cheerio – another Turkish trait that I would become all too familiar with.  Along with the Turkish five minutes which could stretch into hours.

As the bar opposite began to fill up with evening customers, I admit to becoming a little anxious and began to think that I would be spending the night on a sun bed on the beach amongst all the couples that went there for some Turkish lovin’.

Eventually Ahmed returned very dishevelled and sweaty urging me to “come on”.   Not having the energy to argue, I followed him to the car where we drove to an apartment building near the beach. Ahmed opened the door to one of the ground floor apartments so I’m guessing that the deal had already been done with the landlord.  I took a deep breath before walking into what was going to be our home for the next few months.  I admit to being pleasantly surprised, however, jet lag had kicked in and prevented me from interrogating him further but even I had to admit the boy had done good. 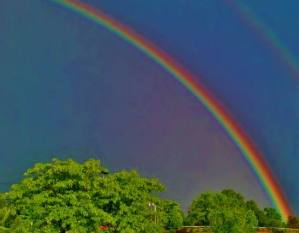 3 thoughts on “Can’t Have Rainbows Without A Little Rain”