It’s the end of civilisation as we know it – or possibly just in my world!

The hard drive on my laptop has been fried. And wouldn’t you know it; Ahmed had a “friend” who had a computer shop. Ahmed,a trifle vexed by my constant whingeing, promptly drove me to the shop. I should point out that I have now become accustomed to his erratic driving style and no longer need a sedative before accompanying him on any journey.

The shop was located in a side street and had the obligatory elderly Turkish men sat outside on plastic chairs drinking çay. As we arrived, a huge vested hairy man came out of the shop carrying a rather large hammer in his hands, which were the size of shovels. “Not a chance” I thought and turned to get back in the car, however, Ahmed clearly had other ideas and pressed on laptop in hand. Not having the same emotional attachment to my Tosh, he did not share the same reservations as I. It was then I realised that it was quite possible that I loved my Tosh more than him.

Once inside the dusty little shop, I realised there was no going back. Although, small there were shelves overflowing with computer parts, in fact, every possible surface was covered with some circuit board or other. Ahmed placed my Tosh on the counter and the big man plugged it in and started it up, a Turkish roll-up dangling from his lips throughout. He was neither a big smiler, or a big talker but that was okay if he had magic computer fixing fingers. Having switched my mean machine on, he spoke with Ahmed, who in turn translated “laptop broken”, which didn’t exactly fill me with confidence. 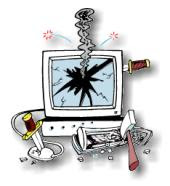 As I turned to leave I had this overwhelming urge to run back and say to him “If you damage my baby in any way, I will have to come back and seriously hurt you”. Images of me being restrained by Jandarmes (and not in a Fifty Shades of Grey kinda way either) prevented me from acting upon my impulses.

As we drove off I wondered how we could raise funds for another laptop if Ahmed’s friend was unable and/or incapable of repairing my laptop. I briefly contemplated the fee I would earn if I were to sell Ahmed on Ebay and disregarded it immediately, realising it would be unlikely that I would get enough for a wireless mouse and a wrist rest.

43 thoughts on “My Dell Went To Hell”