Last Christmas I was fortunate to be able to spend a few weeks with Ahmed prior to the Big Move. Ahmed had managed to secure a winter job caretaking and providing security for a resort hotel. I was a little sceptical even then that Ahmed would receive payment for this job but I kept my own counsel; however, I should mention that he never actually did, which is one of the reasons that he has travelled to Maras this year to spend the winter working in a factory alongside his brothers. The average Turkish monthly wage is about 700 Turkish lira which at today’s exchange rate is approximately £241 or $388, but frequently it is a lot less and that is for a six or seven-day working week. Last winter with no money to pay the electricity bill, his sisters-in-law had to sell their treasured wedding rings in order that their family could light and heat the house.

Many Turkish lads who flock to the resorts to earn money as bar boys during the tourist season frequently work seven days a week and whilst provided with meals and a roof over their heads often return to their villages empty-handed at the end of the season, when the wages which they have been promised by the unscrupulous bar owners fail to materialise. Unsurprisingly, towards the end of the season burglaries and bag snatches become all too commonplace as many young Turks feel that they cannot return home without providing their family with some financial contribution.

Also thrown out onto the streets will be the puppies that the bars adopted during the summer to lure tourists into their premises. 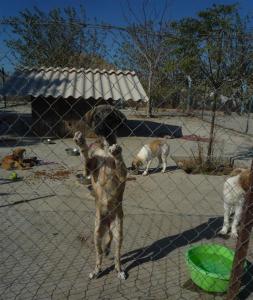 They will be left to fend for themselves, dodging stones thrown, traffic and other adult, territorial ownerless dogs, for which they will be ill prepared. The animal shelter in Altinkum, Didm Dog Shelter and Akbuk Dog’s Trust are government-run and only provide shelter for the street dogs whilst they are waiting to be neutered, when they will also have an ear tag, an anti-rabies vaccination and then they are released back onto the streets. Most “street dogs” have at some time been a pet and abandoned when their owner’s circumstances have changed. For those of us with much-loved pets, it is inconceivable that we would desert our friends when they are most vulnerable. In fact, all government funding has now been withdrawn from the one in Akbuk with immediate effect; what do you do with the animals left behind in these hopeless circumstances? Forget Battersea Dogs & Cats Home and the amazingly equipped ones you see on all the television programmes, this is Turkey; the facilities are at best basic and their resources incredibly limited. Whilst there is a small band of dedicated volunteers that do sterling work trying to find them homes both in Turkey and back in the UK, alongside the mammoth task of raising funds.The funds raised will provide cleaning materials such as bleach, feeding bowls, milk for puppies, blankets, medication including parasite treatment.

Actually if you live in the UK and you are looking for a dog please check out the Turkish street dogs at Many Tears Animal Rescue, based in Wales, first; these dogs have a lot of love to give and deserve a chance at a better life. Volunteering at the Turkish shelters can be a soul-destroying task and sometimes whatever they do, there must be days when it never seems enough. There is no RSPCA equivalent in Turkey to provide care for injured street animals like the young puppy hurled from a balcony by a Turkish youth last week and left to crawl around on the pavement below.

Whilst I love living in Turkey, I think it is fair to say that there are some aspects which sadden my heart. Animal welfare will always be one and deceitful greedy bar owners are another.