My first love was a boy called Darren Butler, who used to live in the house opposite ours. He was a couple of years older than me and we exchanged our first chaste kiss in our back garden under the confetti petals of the old apple tree when I was just seven years old. What can I say I was an early starter! The summer holidays were spent together chasing after the ice-cream van, playing monopoly and riding our bikes up and down the street in-between my horse riding lessons and his scout camp. Our devotion was so strong that he even held my hand after I had fallen through a bank of nettles into the stream that ran along the back of our garden whilst I screamed like a banshee, until my Dad came out and carried me inside to the ministrations of my mother.

That winter our central heating broke down during a cold snap and my Dad placed an old paraffin heater in the bathroom to take off the chill. My sister and I always used to share our baths and inevitably I would be the last one out. As the bathroom was the size of a postage stamp, it couldn’t really accommodate two small hyperactive children intent on tormenting each other. Subsequently, whilst trying to escape from one of my sister’s Chinese burns, I inadvertently burned my bare backside on the grill of the paraffin heater; leaving a perfect set of branded tram lines on my arse.

Amid a great deal of screaming and tears, soothing ointment was applied to my battle scars and in honour of my war wounds I was allowed chocolate as a rare treat before bedtime. I slept soundly that night despite my injuries, blissfully unaware of the humiliation to come.

Over the following week, my mum took every opportunity to show my scars to all and sundry as a warning of what happens when you mix children and paraffin heaters in a small confined space. She would whip down my pants without warning, despite my protests, as a caution to other mothers, who would cluck sympathetically at my branded bare backside.

One such day, much to the mortification of my seven-year old heart, she carried out her usual practise to Mrs Butler, my beloved’s mother. Imagine the horror of having your one true love witness this ritual humiliation. Sadly, I was never able to look him in the eye again and our romance was over as fast as it took my mother to drop my drawers.

Many years later Darren, who is now a much-respected policeman and I met up at a school reunion where he promptly told me with a twinkle in his eye if I intended to “moon” the party, that he would be duty-bound to arrest me. I assured him that my knickers would be remaining firmly in place. 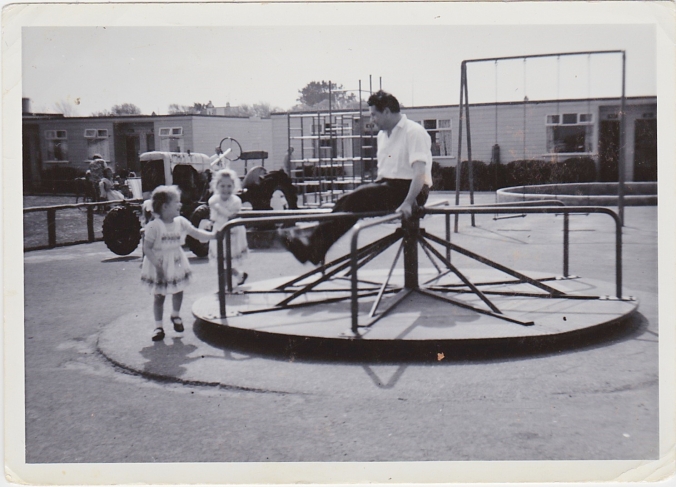 With my true first love; my Dad

81 thoughts on “My Funny Valentine”