Dancing is like dreaming with your feet and makes the stars shine brighter. It also improves your flexibility and promotes an overall sense of well-being. In Dallas world after a couple of Babychams, my sister, Beverley Big Pants & I think we’re dancing queens although there is a distinct lack of rhythm but what we lack in skill we make up for in enthusiasm and volume much to my nieces’ embarrassment. In fact the only time I ever look good dancing is if I’m next to my dad at a wedding!

Although my Dad is supposed to be a bit of a Fred Astaire when the mood takes him; 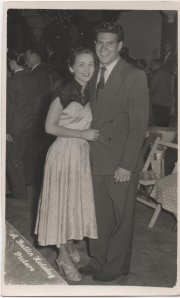 I understand that my parents’ courting involved a few Quicksteps and the odd Foxtrot although my mum insists that he used to tread all over her feet. It’s hard to imagine my wellie-wearing Dad enjoying anything that doesn’t need planting or pruning but apparently not

only does he know his promenades from his box step but there was a time when he cut a mean figure in the Victoria Hall Ballroom in Halifax.

So it was no surprise to me when he dragged me along to Senior Citizens’ Day at the local DIY superstore when they offer a small discount to anyone brandishing a bus pass. In keeping with the theme, music of a certain era is piped through the public address system and there are various demonstrations throughout the store. My Dad appropriately dressed in his cloth cap, pencil firmly fixed behind his ear and retractable tape measure in hand set off for the store in the old jalopy with me riding shotgun.

Once inside the store he made straight for the shelving; where else! I should mention that the real reason my Dad takes along his tape measure is so that other shoppers stop him to ask for his advice mistakenly thinking he is a professional. On this particular day as my Dad was singing along to Jim Reeves and Nat King Cole, he was stopped by two ladies who asked him for some guidance and they got chatting. Somehow during their laughter filled conversation my Dad ended up waltzing them around the aisle much to the amusement of other shoppers and when they’d finish they got a round of applause.

For our return performance, I’m having the slogan “Available for Stand Up & Pantomime” printed on the back of his shirt.