It’s been a while so here’s Part One for those that missed it!

The rain continued to lash down so regrettably I wasn’t going to get the opportunity to wear my oversize vintage Givenchy sunglasses purchased for the princely sum of £2.50 from the charity shop after all. Fat and full from the bacon buttie I’d troughed, I noticed that things seemed a little busier upon my return and a little tense amongst my car parking colleagues

with a lot of walkie-talkie action going on. Erin identifying Tommy’s dulcet tones had grabbed hold of our handset and screeched across the airwaves “Tell Tommy I love him”. Yes Erin, I rather think he got that but there again so did the residents of the next county.

Throughout the afternoon the lovers whispered sweet nothings at each other over the airwaves until a little while later when Erin spent a little too much time chatting with one of the fit firemen. Suddenly the kissy kissy love chat and innuendo was quickly replaced with heated accusations.

“Big Wheels Postie to Car Park Princess, could you ask that fireman to take his eyeballs out of your cleavage”.

“Roger Big Wheels Postie, it’s nice talking to a man whose idea of romance isn’t spending a night in playing Mafia Wars whilst I defrost his freezer”. And so it went on.

It was during the lovers quarrel that my iPhone buzzed alerting me to a text message from Serial Shagger which just simply said “Miss Me”? Immediately followed by a YouTube clip of Adele singing what I had thought was “our song”, although in hindsight “Go Your Own Way” 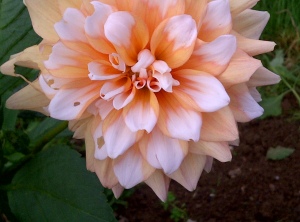 might have been more appropriate. Clearly, he had been informed of my glamorous job role and breathtaking appearance by Nauseating Nigel. For a few moments I hovered somewhere between anger and embarrassment but then I looked at my calloused hands which had spent countless hours stripping & painting walls of our former home and which had been destroyed by him in a fit of spite.

So I took a deep breath and text back “I’m not Adele. I don’t wish the best for you and neither do I want to find someone like you. I do, however, want to set fire to all your worldly goods” and promptly switched my phone off.

Fired up by my heated exchange with Serial Shagger and with my tolerance level at an all time low I snatched the walkie-talkie from Erin and in the words of Bootilicious Beyonce, I told Tommy quite firmly to put a ring on it. Well if you’re going to walk on thin ice you might as well tap dance across it!

As Tommy and Erin enthusiastically reconciled, I felt that my work as a peacekeeping & matchmaking kick-ass ninja was done so I made my excuses and headed off in the direction of the marquees, as I wanted to catch the awards being presented. I got there in time to see Sid’s marrows earn a bronze and Ernie a silver for his runner beans. However, I think we were all pleasantly surprised when my Dad won a gold for his Dahlias.

In my Dad’s acceptance speech, he declared that it was the proudest moment of his life. My mother looked less than thrilled as she had been under the illusion that she had earned that accolade on the day she married him and later when she endured hours of painful childbirth to deliver his offspring. 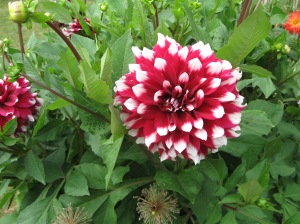 And the winner is ……

Clearly, my Dad had either been partaking in his own homebrew or had developed a taste for sleeping with one eye open and would most probably now be restricted to muesli breakfasts for the remainder of his natural-born life. His prize was a bird feeding station and my Dad handled it as if it was a religious relic.

As we all trudged back to the car park, my Dad was deliberating where to put his prize; if he continued to talk about it that evening whilst my mother was trying to watch the X Factor, I was pretty sure she would be able to help him with that!

As luck would have it, our car had become entrenched in the sodden earth. My Dad reckoned he could ease it out of the mud if we all gave him a push. We assumed the position at the rear of the car, my mother throwing me under the bus, by insisting I stand behind one of the rear tyres and Ernie the other whilst she was better and safer placed in the middle. For some reason unbeknown to us, as the wheels spun, mud was splattered in the directionality of my mother so she was coated head to toe in Devon’s finest fertile soil. As she looked like she’d spent the afternoon mud wrestling, Ernie offered to rinse her down with a bucket of water he kept in the back of his transit van for such an occasion but as she was sporting her cherished Jaeger coat she just gave him one of her withering looks that could dissolve steel. Ernie recognizing a force of nature when he saw one wisely jumped back into his van and hightailed it out of Dodge leaving us to face the impending storm.