Most of you will know that the garden and the old fella’s allotment are wildlife havens although my Dad has had to install deterrents for the Herons arriving to lunch on his Koi carp. Anyone on either two or four legs is guaranteed a meal at Dyson Abbey, even the birds eat A La Carte on the rare occasions when any of my mother’s homemade baking is left to go stale.

So one unbearably humid evening last week as I was trying unsuccessfully to grab some sleep before my alarm clock woke me at 5am, I heard this rather loud snuffling sound coming from the garden directly below me. I thought it might be one of the cats being ill, as we live in the countryside and it’s not uncommon for cats to fall foul of rat poison that farmers have distributed to eliminate the growing vermin population.

I grabbed my trusty old Star Wars torch (another classic birthday gift from the old fella) I reluctantly left the comfort of my bed to pad downstairs and opening the patio doors I crept into the garden. I quickly scanned the garden with my light sabre to determine where the noise was coming from and whether I would be making a mercy dash to the local veterinary hospital.

I refrained from switching on the industrial security lighting which my Dad had installed mainly because it had enough power to light Wembley Stadium and I didn’t want any low-flying aircraft mistaking our lawn for a runway.

To my amazement there was a mother and baby hedgehog eating the remains of Hobo’s supper. To our intense frustration Hobo insists on dining al fresco during the summer months and I’m guessing with the lack of rain that we’d had the soil was probably rock hard preventing the little folk from foraging. My Dad is always pleased to see a Hedgehog who after all is a gardener’s friend and it may well have been that this adorable duo had been visiting our garden for some time completely undetected.

I was totally enchanted by these fascinating creatures and even more thrilled when I opened another small tin of cat food and the baby, obviously very hungry, boldly ran across the lawn to dine on chicken and vegetables. Mum who was three times the size, was a little more reticent and hung back until I made my way inside the house.

Since then I’ve noticed that they arrive regularly every night to dine at the four star Dyson Bistro and arrive in crocodile formation walking the same route up and down old railway sleepers and eventually onto the patio to partake in the evening’s menu. As our rescue bunch who as strays were accustomed to scavenging bins have developed champagne and caviar taste since coming to live with us, we always have a substantial amount of surplus cat food and can usually accommodate the most discerning palates.

The past few evenings the little folk have out foxed me by arriving at different times but the other night I noticed that there were four of them so clearly our reputation as a four star wildlife catering venue has reached the rest of the local hedgehog community. We’re not complaining though as there’s something very special about hedgehogs and its a privilege to be able to share our time on this earth amid such enchanting creatures.

The earth has music for those who listen – William Shakespeare 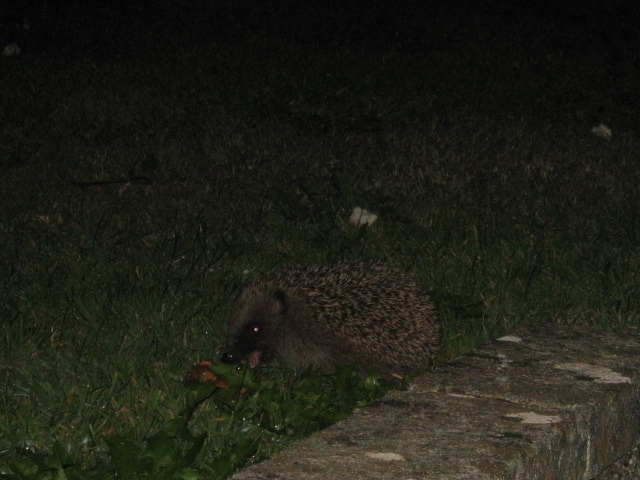