After watching one too many television programmes extolling the benefits of renovating your house on a shoestring, I grabbed the bull by the horns and decided somewhat naively that I would move back into the old cottage that I had shared with Serial Shagger and practise my limited interior design skills; after all they made it look so easy! Temporary insanity (I blame it on the fever) had convinced me that I could transform the fleapit into an oasis of sumptuous luxury using just a couple of rolls of wallpaper and a faux fur throw. Unfortunately, only two nights into the project I became ill with blinding headaches and nausea. I googled all my symptoms and became convinced that I needed to write my last will & testament pretty damn fast; a little bit of information can clearly be a dangerous thing! Obviously the plaster dust combined with the old horse hair used to bind the walls when the house was originally built had not helped my condition any.

So when my mother called she reassured me that I was not going to be expiring any time soon and I could cancel my funeral arrangements post-haste as she was on her way. So I shelved all thoughts of gifting my Yankee Candle collection to the local animal shelter charity shop for the time being. Arriving with her bag of tricks wrapped in a Marks & Spencer carrier bag, she laid all the items out on the table; Menthol Crystals (not to be confused with crystal meth), a rather dubious looking cough mixture (in the same coloured box as rat poison but minus the skull & crossbones logo) and the most important ingredient of all; a bag of frozen peas. Although to be honest it was peas & carrots picked fresh from Dad’s allotment at the end of the season and then frozen but you get the gist!

Protesting that I had no appetite,“Deborah, just listen to your mother” she sighed and filling a bowl with hot water she instructed me to put my feet in it whilst placing the frozen peas on the back of my neck. I have to admit that the throbbing pain in my head began to subside. The next remedy involved another bowl of hot water infused with a pinch of the menthol crystals and draping a towel over the back of my head I began to inhale one of the old dear’s “cure-alls” followed by the most popular one of all; a cup of tea.

Feeling substantially better I realised that as my demise was no longer imminent I now had to reassess the DIY situation because no amount of floating shelving or discreet lighting could transform my surroundings from dump to Des Res. This was going to be somewhat of a mammoth challenge and required a superhero in a red cape with blue “go-faster” stripes! 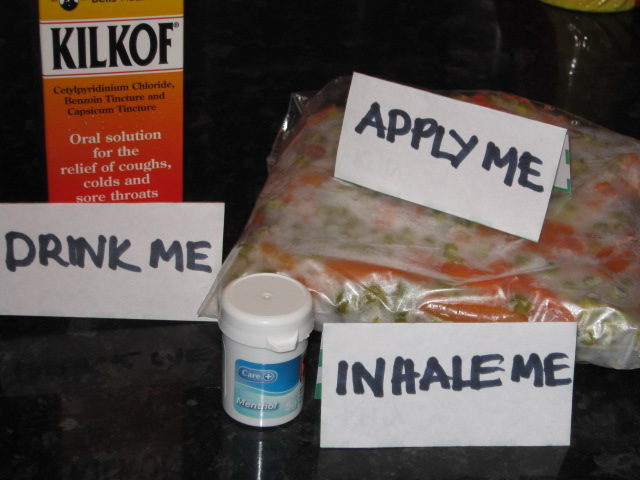 24 thoughts on “When Mother Knows Best”